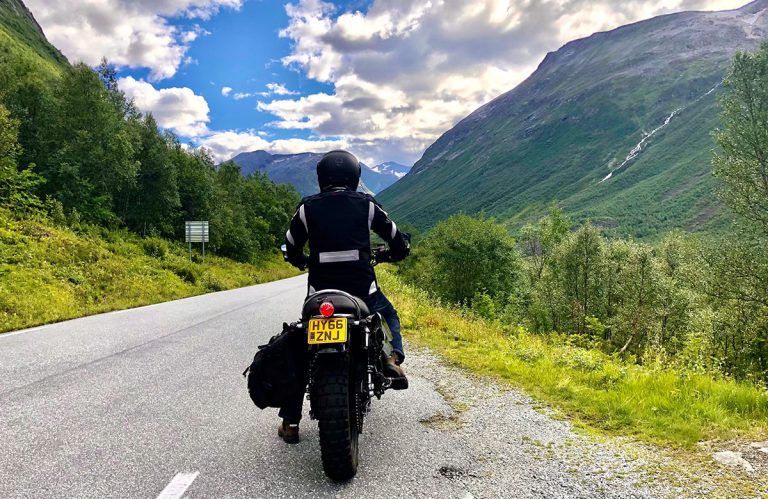 Planning to go touring in Europe with your motorcycle? Want some amazing places to visit and epic roads to ride? No problem- we’ve got some great route options for you.

*We work hard to make this the best motorcycle touring & tips website possible, for both male and female bikers. The website is supported by our readers, so if you buy through links on this site we may earn a commission- at no extra cost to you. All opinions remain our own.

When people find out we’ve been motorcycle touring around Europe for over three years, they often ask where are the best places we’ve been. I’ll admit, narrowing it down wasn’t easy, but here are 5 of our favourite European motorbike routes.

We ride Triumph Scramblers for our long motorcycle trips- they’re awesome bikes. And don’t think we’ve forgotten about places to ride in the UK- that video’s coming soon!

Let’s start with one of the most incredible roads we’ve ever had the pleasure of riding on. This jaw dropping road is Strada Della Forra and it’s literally built into the cliffs on the west side of Lake Garda in Northern Italy.

The road is famous for several reasons, including being used as the setting of a James Bond car chase. But yet it’s still not crazy busy, which is rare when motorcycling in Italy.

Be glad you’re on a motorcycle- the tunnels are too low for anything bigger than a 4×4, but on a motorcycle it’s perfect. The road has a traffic light system through the steepest and narrow section, so you don’t need to worry about oncoming traffic whilst looking at the views.

And if you’re on a bike, there’s a small lay by where you can stop and enjoy taking some of the best photos of your motorcycle you’ll ever get. It truly is one of the most incredible motorcycle touring destinations in Europe.

If you have a motorcycle sat nav, follow the directions carefully- it can be easy to take the wrong turn and miss the route completely!

Next up is the breathtaking Trollstigen, which literally means Trolls ladder in Norwegian. Situated in the Northern part of Southern Norway, this incredible road is another one that’s built right up a cliff. However, unlike Strada Della Forra, this one is two way and, as well as cars and bikes, you’ll also get buses, trucks and coaches whizzing up and down, barely able to fit on a road with a very, very steep cliff over the side.

For this one we decided to ride on one motorcycle two up so that I could hold the GoPro and get shots of those incredible views. We don’t do this very often, but I think it was definitely worth it on this occasion.

Another motorcycle touring road we loved is the Grimsel pass in the Swiss Alps. Now we sadly rode these before we thought about GoPros or YouTube or anything like that. But that doesn’t take away how amazing these roads are. If you like twisty roads, hairpins and fantastic views, add these to your motorcycling bucket list right now.

Whilst you’re on the road, to be sure to stop at the Gelmerbahn Funicular, which is one of the oldest and steepest mountain railways in existence. It goes up a gradient of 106% and you can ride in an open-topped car up and down the mountain side- definitely not for the fainthearted (my poor daughter was terrified!) At the bottom of the funicular is an amazing rope bridge right across the canyon, which is probably not a place for you if you don’t like heights, but it’s got incredible views as well.

And if you like twisty mountain roads (who doesn’t) and have a little more time for your tour, head further East into Austria and ride the Glockner High Alpine Road– it’s magnificent.

The Black Forest in Germany has some incredible motorcycling roads. The most famous is the B500, and it really is an amazing road. However, there are plenty of other, smaller roads on both sides of it which we actually preferred- there were more places to stop and enjoy the incredible views.

Motorcycle Touring in Monaco… because you can!

We didn’t mean to visit Monaco on our motorcycles. Seriously- it just sort of… happened. We were motorcycling in France, coming back from the Menton Lemon festival (well worth the trip if you can) and passed the sign for Monaco… so we followed it.

And that’s how we ended up riding our motorcycles on part of the famous F1 circuit and enjoying a delicious ice cream on a sunny day whilst surrounded by some of the most expensive property and boats in Europe! As the end of a motorcycle touring day went- it was a good one!

See all our motorcycle touring posts and country guides here

Motorcycle touring and tips for bikers

Hey & welcome to Biker Girl Life. I'm Kat and I've been touring the UK & Europe on a motorcycle for years. (I'm also a little addicted to track days, although I've still got lots to learn.)

I hope sharing our stories and adventures will inspire anyone (guy or girl) interested in motorcycle touring or adventures on two wheels- whether you're a new rider (& feeling slightly nervous) or more experienced and looking for new roads to ride.

Find out more about us here