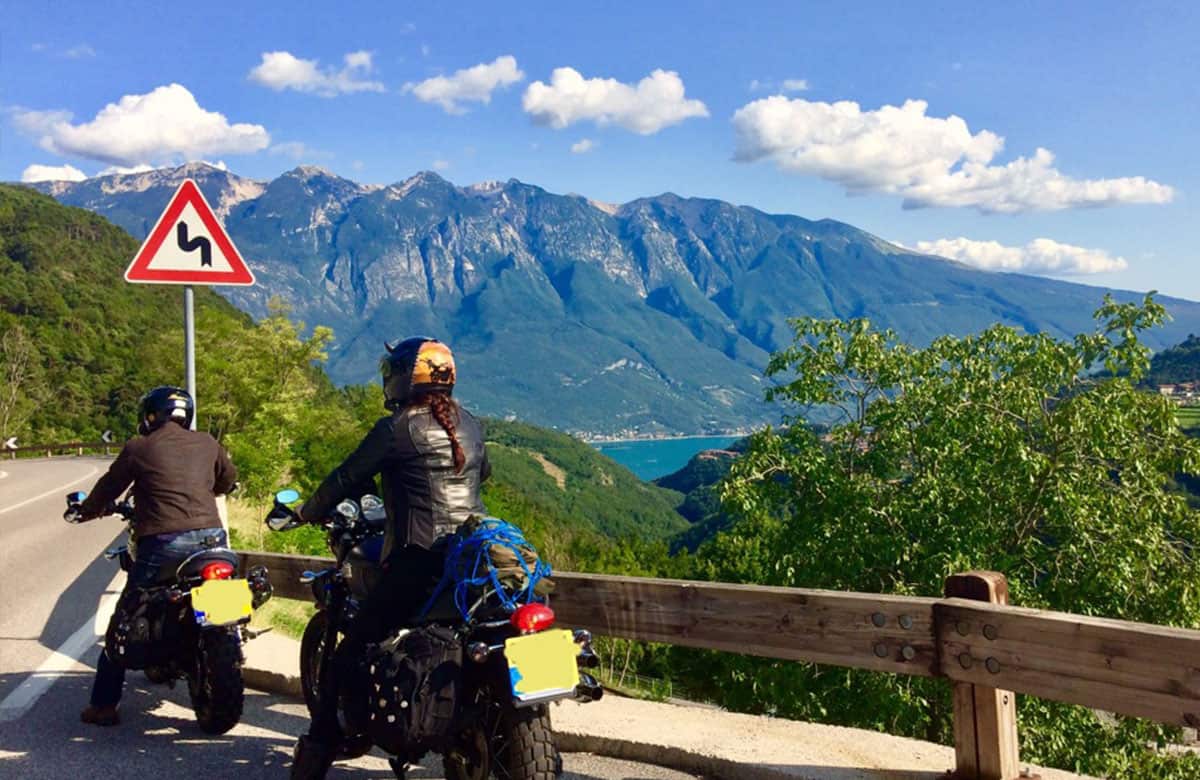 I knew I liked you- I always click on the ‘about’ tab too. It’s fun finding out more about the people BEHIND the website, isn’t it?

So, no pressure then… I’ll try not to disappoint *deep breath*

Why I started riding my own motorcycle

Hey, I’m Kat and I’m a recovering nervous biker. Despite being a pillion for years, I’d never even considered getting my own bike, being perfectly content to ride on the back and watch the world go by.

We spent the first 10 years of our relationship exploring much of the UK, including Scotland, Wales and Jersey (where, incidentally, I was born.)

However, as our daughter Jade grew up (don’t you hate it when kids do that!) she eventually got old enough to want to ride on the motorbike behind Daddy. Which meant, I lost my seat. 🥺

The options were literally learn to ride my own bike, or get left out of the adventures. So I learnt to ride (went straight to Direct Access) and bought my first ever bike (a beautiful blue Suzuki 650 Bandit)

Being a nervous rider (and quitting)

However, my first year with a motorcycle was… underwhelming. I spent a good portion of that time feeling like me and motorcycles just weren’t meant to be.

I couldn’t get comfortable and I scared myself more times then I want to remember.

Seriously, it got so bad that I quit. Oh, I still continued to own and pay for a bike… but I never actually rode the thing. I just looked at it and felt a weird mix between failure and guilt. You can watch the whole sad story here:

Trying again (and heading to Europe)

Still, despite my fear, there was SOMETHING that kept nagging me to come back and try again (that something was mostly my husband and daughter, but I digress…)

In 2017, my husband bought a Triumph Scrambler and I was intrigued- it was pretty and looked so easy to ride. So I bought one too- and fell in love.

I realised that I’d been riding a bike which was all wrong for me. I didn’t want to go like a bat out of hell and impress other riders- I wanted to enjoy the world we were travelling through, experience it on two wheels and go at my own pace. I was a tourer. (NOTE: I’ve recently started doing track days, which I love, but at the beginning the thought of going over 80mph on a bike terrified me!)

And from that point onwards, my confidence grew. We travelled further and further, until eventually we started exploring and motorcycle touring around Europe.

It was our initial plan to do all our motorcycle travelling on the bikes, using hotels and B & Bs. However, we (I) quickly discovered that long distance journeys on a bike with a teenager weren’t much fun!

Not only that, but we had to pay for two rooms everywhere we went- which made the costs more and more expensive. One day, we happened to ride past a motorhome towing 2 motorbikes on a trailer behind it… and we were hooked. What a fantastic solution to our problems- we could tow the bikes somewhere, have a decent bed, and then use the van as a base while we explored and toured around on the bikes.

So that’s what we did.

And we LOVED this life. A Lot. So much that I quit my job as an air traffic controller in order to be able to travel more. (That’s adulting, right?) After that, we spent over 18 months touring, exploring and home schooling our daughter.

Now, we’ve explored over 15 countries around Europe. Our daughter has grown up and is now mostly too cool to travel with us (although she still always asks when we can go on the next bike trip) but we continue to explore as much as we can (and we’re allowed to!) You can find out more about that here:

Honestly, I debated this name for AGES. The problem is, female motorcycle riders are often viewed a certain way. And they’re called certain things.

I have no problem being called a ‘biker chick’, ‘moto lady’ or even a ‘biker babe’ (thanks) but I didn’t want to buy into the whole ‘girls on motorbikes must be sexy to get attention’.

I regularly put on makeup before I go for a ride (YES, it gets in my helmet. Urgh) But I also put on makeup to go to the shops. That’s just me. I don’t act or dress any differently before I get on a bike. And you will NEVER find me riding a motorcycle in a bikini and high heels (Like, seriously?! Why would you even do that…)

I chose the name ‘Biker Girl Life’ to encompass all the things I love to do on a bike (get your mind out of the gutter! 😉) I love touring and I’m currently being brave and exploring the world of motorcycle track days. I like quick ride outs and I love setting off for new destinations with no clue what we’re going to find.

It’s a website created BY a girl for anyone who likes (or is intrigued by) motorcycle touring, adventure and a slightly worrying obsession with caramel lattes.

Why’s it called Biker Girl Life if you’re a couple?

Ooooohhhh, good question. I ride mostly with my husband, Jay. I love riding with him and we have some epic adventures together. And, to be honest, riding is possibly one of the few times we actually chat crap and connect with each other without other things in life interrupting.

Also, much as he loves riding, he is NEVER going to sit down and write up our adventures. He’s just not. So you’re getting them all from MY perspective. Lucky you.

Also, girls have unique problems to boys. Not just the boobs and the hips (although that’s a whole THING when buying leathers), but the attitudes, the comments, the ‘surprise’ at the fact that you’re a girl. On a bike.

Sadly, the fact remains that less than 10% of all UK bikers are female. I think it’s around 15% in the USA. We are very much a minority and there are even fewer biker girls talking about those problems.

So I wanted to create a space where I can share MY perspective of being a biker, connect with other riders (both male and female) and hopefully share some insights into our slightly crazy life.

One of the biggest problems I had as a rider who didn’t ride a motorcycle until my mid-30s was finding other ‘newbie bikers’ who were also experiencing the same feelings of self-doubt and under confidence.

It never even occurred to me to look on Youtube, although I now realise that there are several channels, both male and female, which would have helped me not feel so alone.

And I want to help you.

It doesn’t matter how old you are, whether you’re male, female or undecided- anyone who has the balls to get on a motorbike and ride near other people is part of my ‘clan’.

I KNOW how daunting it feels when you think everyone is better/ faster/ judging you. I KNOW how the little voice whispers utter shit in your ear and makes you doubt your own abilities. And I KNOW you can and will beat it and become a better rider.

The main reason I wanted to share my story is so people know it is possible to start riding motorcycles later in life, be rubbish, be nervous, quit… and then go off on long tours around foreign countries.

Seriously, I don’t want to be a cliche, but if I can do it, you can do it. I promise. Whether you just want to pootle (totally a word) on a Sunday to the local biker cafe, or you’re planning a round the world adventure (so jealous), we can all support and encourage each other.

Here are some answers to frequently asked questions:

What was your first motorcycle? Suzuki Bandit 650. She was pretty but wrong for me in every way

Where are you based? Portsmouth, UK but we also have a house in France and we travel Europe in a motorhome (you can check out our motorhoming website (Wandering Bird) here if you’re interested)

How old are you? I stopped counting at 35. That was a few years ago 😉

Favourite place you’ve ridden? This is possibly the hardest question! Norway was epic. I love Scotland. The Italian Dolomites and German Black Forest were breathtaking and riding around Monaco on part of the GP circuit was epic. Sooo… all of it?

What gear do you use? Ok, here we go:

What dog do you have? Mac is a working cocker spaniel, born in 2018. He loves bike rides and travels in a doggy backpack now he’s outgrown his puppy bike box.

Where can we connect?

Yay, I’d love to connect with you too. The best way to stay connected is by joining our email list at the bottom of the page.

I also share our stories and adventures on Youtube- please do come and say hi on a recent video.

If there are any questions you have which I haven’t answered, please feel free to ask!

Wherever you are, whatever you ride, stay safe out there.

Motorcycle touring and tips for bikers

Hey & welcome to Biker Girl Life. I'm Kat and I've been touring the UK & Europe on a motorcycle for years. (I'm also a little addicted to track days, although I've still got lots to learn.)

I hope sharing our stories and adventures will inspire anyone (guy or girl) interested in motorcycle touring or adventures on two wheels- whether you're a new rider (& feeling slightly nervous) or more experienced and looking for new roads to ride.

Find out more about us here